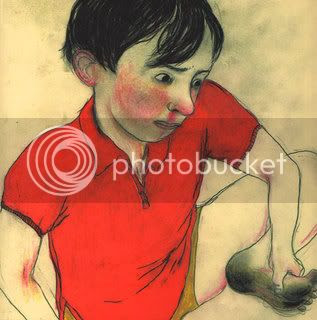 When we were kids, my cousin Oskar and I used to draw a lot together. Sometimes we made our own magazines. I remember his style being much more advanced than mine - he knew how to draw bears and monsters and his characters would usually be saying smart and political things I knew nothing about at the time. He would even draw his own mixtape covers, with very cool handwriting to match.

Amanda Vähämäki's wonderful pencil drawings remind me of Oskar's. And Bullefältet (also available in Italian and Finnish) is a magical and surreal graphic novel that stands for itself. I'm very happy to have had my copy signed with a beautiful drawing by the artist at the Stockholm spx08 this weekend.

Another one of Vähämäki's stories, The Prophet can be found over at Electrocomics.
Posted by Angelica at 18:35 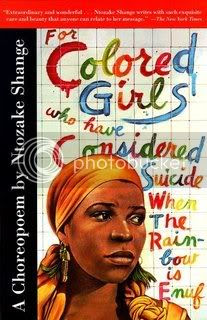 for colored girls who have considered suicide / when the rainbow is enuf by poet/choreographer/director/author/playwright ntozake shange is one of few books I never could have done without.

I remember my first time reading something by shange, a poem called People of Watts, inspired by Dana Lixenberg's portrait photography in a '93 issue of Vibe. There was something about it. Not long after I recognized her name in the Me'Shell N'degéOcello song Two Lonely Hearts (on the Subway), off her debut album Plantation Lullabies:

In '95 I was in NYC for the first time in my life, hanging out at the Nuyorican Poets Café to catch a little something of the atmosphere surrounding shange and her friends; star-struck and overwhelmed by the opportunity to interview author/activist Lois Griffith about the café, the poetry slam scene and the disenfranchised of the U.S. and Sweden.

In the vintage section of the Strand Bookstore I found most of shange's work and I became obsessed, especially by for colored girls (...) which is a choreopoem for 7 women in 7 different cities of the U.S. It was first performed in a woman's bar outside Berkeley, California in '74, later moved on to Broadway, winning an Obie Award.

Lady in Orange:
i'm on the lower east side
in new york city
and i can't i can't
talk witchu no more

20 monologues/poems are intertwined with dance. It's about being an African-American woman in the 20th century, about love, race, gender and violence.

Lady in Orange:
i cdnt stand it
i cdnt stand bein sorry & colored at the same time
it's so redundant in the modern world

Years have passed and I've kept coming back to for colored girls (...) Evidently I had to pay tribute in my radio play on hip-hop and betweenship:

I didn't realise until now what it was I really saw in Ocean Harbour, South Georgia in February: 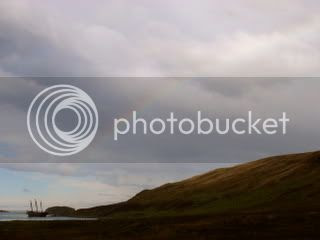 Lady in Brown:
& this is for colored girls who have considered suicide / but are movin to the ends of their own rainbows

Look inside the book here.

Listen to great gay rappers Deep Dickollective who have done a beautiful tribute to shange and the choreopoem called For Colored Boys here.
Posted by Angelica at 22:08

The Sonnets to Orpheus by Rainer Maria Rilke 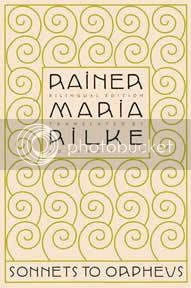 After a recent falling in love with the Duino Elegies, one would hope that his sonnets to Orpheus, written during the same time period as half of the elegies, would be as wonderfully insightful. To me, they are not. The only sonnets I kinda liked, that perhaps resemble the elegies a little are:

II:13
Be ahead of all parting, as if it were
behind you, like the winter you just weathered.
Because among the winters there is one so endless winter,
that, overwintering it, your heart recovers altogether.

II:26
How we are gripped by a bird's cry ...
any uniquely-created cry.
But the children, playing under open skies,
already cry beyond actual cries.

Cry the accident. Into holes
of this, of space (in which the whole
bird cry is received, like men in dreams -),
they drive the wedges of their screams.

Alas, where are we? Free, like kites
ripped loose from their moorings,
laughter-edged, we race half-height,

tattered by wind. -Arrange the criers,
singing god! to awaken roaring,
bearing like torrent the head and the lyre.


The whole thing can be found here.
Posted by Angelica at 11:49 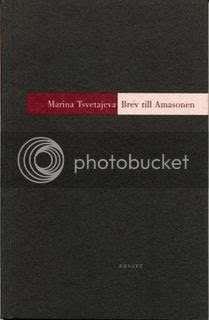 Marina Tsvetaeva answers Natalie Clifford Barney's Pensées d'une Amazone after their meeting in Paris in 1932. In short, she writes about the psychology behind a lesbian woman's choice to leave her older girlfriend for a man; for her utmost desire to have a child.

[It is not the day the child was born, it is now, three years later, that she knows what it has cost her.]

More Tsvetaeva.
Posted by Angelica at 15:49